Coca-Cola company is one of the leading beverage manufacturers in the world. Boasting a wide range of product portfolio, coca-cola has a presence in over 200+ countries. This article will talk about the SWOT analysis of Coca Cola 2023 ( Strengths, Weakness, Opportunities and Threats).

–Strong Brand Equity: Coca-Cola enjoys a strong brand equity that enables its to make a higher margin on sales and reduces advertising and marketing costs.

–Loyal Customer Base: Coca-Cola has a huge loyal customer base. Coca-Cola is the first and only choice of the consumers who like its taste.

Present in over 200+ countries, it’s just because of the strong supply chain and distribution network that you can get coca-cola even at the most remote places of the world.

–Strong Product Portfolio: The Coca-Cola Company owns and distributes over 500 different brands, which is the most extensive beverage brand portfolio in the whole industry. The company offers beverages for every taste in 7 beverage categories:

Weaknesses stop an organisation from performing at its optimum level. They are areas where the business needs to improve to remain competitive:

–Heavy reliance on Carbonated drinks: In developed as well as developing countries, health-conscious consumers have started to shy away from carbonated beverages containing elevated levels of sugars or artificial sweeteners. All these factors have muted the growth of the company. High dependency on sweet carbonated drinks is what is impacting the top line of Coca-cola and would need an immediate course correction. 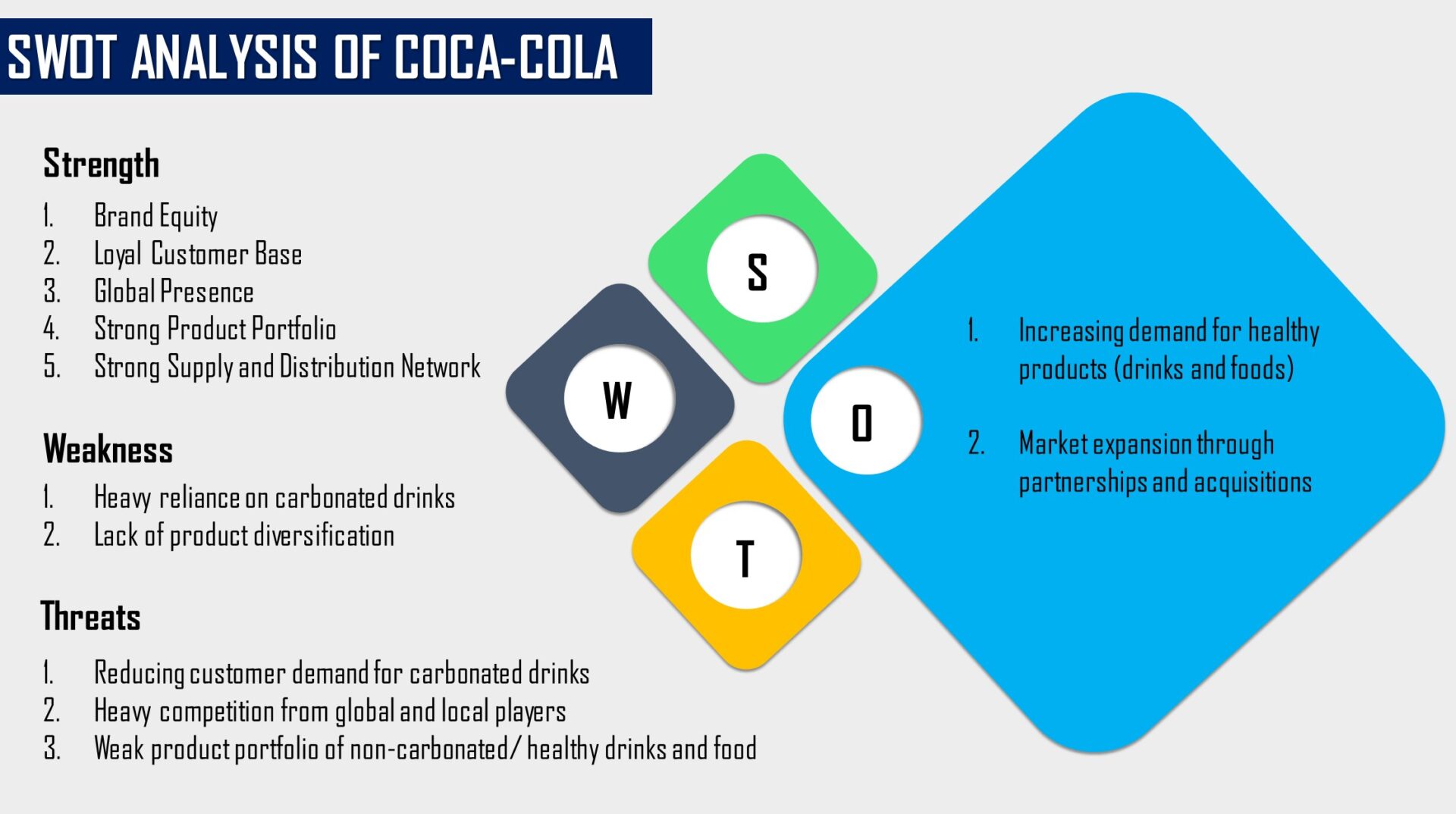 Threats refer to factors that have the potential to harm an organization in the future. Given the fact, threats give a brand a far-sighted view about the problems that the brand is likely to face in the future, it is one of the most important factors in the SWOT Analysis of Coca Cola.

— Reducing consumer need/demand for carbonated drinks: With changing time, consumers are giving up sweetened carbonated drinks and are moving towards health and energy drinks. This change is demand is likely to impact the sales of Coca-Cola as their major chunks of sales come in from carbonated drinks.

— Heavy Competition from Global and Local players: It’s not just Pepsi that Coca-cola gets competition from, there are no. of local beverage manufacturers that are trying to eat away the market share of Coca-Cola. Companies such as Starbucks and Dunkin’ Brands Group which are not a direct competition of Coca-Cola, but have managed to place a dent in the company’s market share.

This one point is the brand’s, weakness, threat, and its biggest opportunity – It all depends on how it decides to mold it.

Check out the marketing mix of coca cola

Opportunities refer to the factors which the organization can use to its favor to grow its market share, sales, brand recognition etc. It’s the second most important factor in SWOT Analysis of Coca Cola as it will shape the future of the company’s strategy.

Introduce products to the consumers, market them to create awareness and brand recall, it’s a chance that no brand can afford to lose.

–Partnerships: Coca-Cola can look into increasing the market share by partnering with other non-competing brands, one such example is Coca-Cola had a strong partnership with Domino’s , which over the years has become a little sour. So something of the same sorts can be looked into to increase the sales and market share.

While the number of challenges facing Coca-Cola is abundant, this company posses a great deal of promise for the future. The company holds a strong brand equity and loyalty, its just the opportunities that it needs to play on to outdo its competitors.

This Concludes the SWOT analysis of Coca Cola

Check out the BCG Matrix of Coca Cola